How to draw sheep.

You may be thinking that ' this is a fine Learning Site', you havn't learned anything! - So I'm going to teach you to draw sheep. Why sheep? Well, because it's easy and once you've learned to draw one sheep you can draw another and another, until you fill your painting with sheep, that is, if you haven't fallen asleep!

I teach people to draw and paint watercolours, and it often amazes me that my students are satisfied with landscapes devoid of all animal life until I show them how they can include a sheep or two and pep up their painting. The same goes for beach scenes without boats or people - but that's another chapter!

I first started drawing sheep when I taught on a course on the Faroe Islands in 1994. I discovered a system which when I tried it out on my pupils, got them to draw reasonable "sheep" without too much trouble and they, of course, got better with practice.

With this very simple system, you will learn to draw a single sheep and you can also use it to draw a whole flock.

First , let us ignore the different breeds of sheep and concentrate on a typical 'grass muncher' in a typical position, standing sideways with its head turned towards the onlooker.

You start by drawing an oblong and a triangle.
Now that is simple! You don't need to use a ruler!
The only problem here is that the proportions between the oblong (body) and the triangle (head) have to be correct. And that has to be found by 'trial and error'. The two geometric forms should be drawn faintly with a pencil, they are only a help for what comes next.

When you've drawn the 'oblong' and 'triangle' then you have to make the triangle into the sheeps head. You add the curley hair on top of the head and the curley fringe over the eyes. Don't bother with the eyes! The nose is long and broad, but don't join the bridge of the nose to a point under the fringe! The nostrils and mouth are at the bottom of the face. The neck starts around the side of the face and joins the body at the lower corner of the 'oblong', and don't forget the two small ears!

Now we can begin working with the back end of our sheep. The back end of the sheep can be as round as you want to make it, the important thing being that the hind leg starts from the lower left hand corner of the 'oblong'. The far side leg is mostly hidden by the belly of the sheep but I've indicated it's form, (with a dotted line), in illustration (b).

The front legs are placed around the lower right hand corner of the 'oblong'. The closer leg starts quite broad in the body of the sheep and tapers down. The far leg is shown behind the front leg as a narrow leg.

If you have trouble with the legs, then hide the legs in high grass!

The last thing to do is to give the sheep some shading. Our sheep is clean and white, so the shading has to start around the bottom of the belly and tone out towards the top of the back. The far back and front legs will be quite dark and the neck under the head will also have a shadow.

To simulate 'wool', a circular motion with the pencil is used here.

But what about a flock of sheep?

a) You begin by drawing the 'oblongs and 'triangles' in the pattern you want the flok to have.

b) Next, you draw the sheep.

and c) And last of all, you shade them. 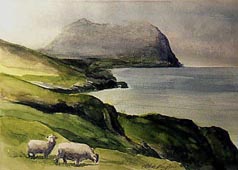 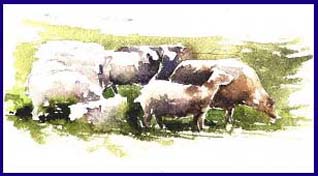 
watercolour book on a CD